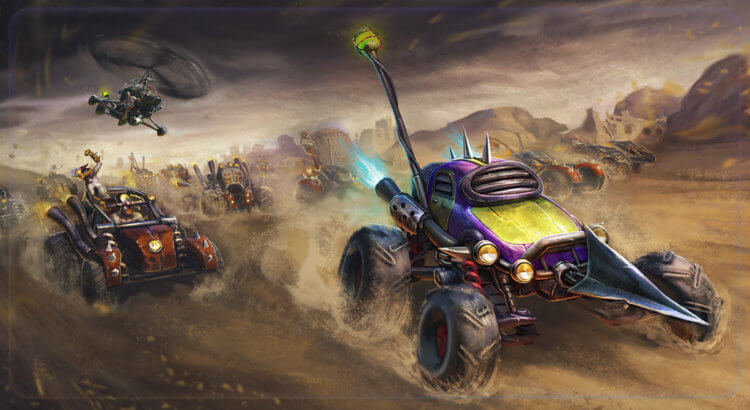 Dirt Devil, the mercenary from the desert started off hunting the Worm. Young and fearless, he dove into this adventure to take that beast down. He didn’t know the price he would need to pay though. In the strife, he managed to hit the giant plague with his harpoon, but the fight cost him an eye and an arm.

Now, in the adult life, he is never alone. Dirt Devil rides with his gang throughout the desert and Metal City. He is the leader of the Sand Pirates, and they scavenge the Wastelands season after season to take down sandworms and other gangs that try to cross their paths.

Yet, year after year, there’s always one that gets away from the gang’s skilled traps: the original Dirt Devil, the largest sandworm in the Sand Seas! The man who took its name chases the worm across the Wastes, like a storm watcher after a tornado. For him, there’s more at stake than just the fame that comes with bringing down the worm. For Dirt Devil, the worm is his reason for…everything.

The Metal City’s arenas are the stage for his mercenary job. He is not a pilot who wants the fame or to play the hero for the people. All he wants is to take the Worm down. The tournaments are a way to raise enough scraps and money to support the gang.

Capable of causing damage in a hunt or flee when pursued, the Devil’s vehicle is an insane off-road that finds no difficulty at any terrain.

Have you tried to play with Dirt Devil? Take your chances and choose the mercenary from the desert to your team!