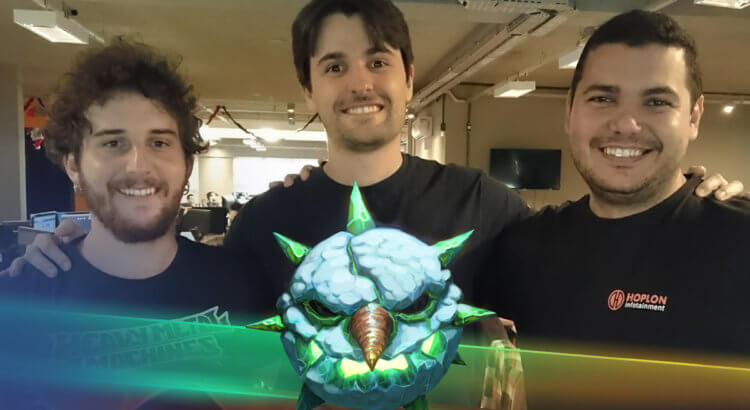 Christmas is coming to Metal City, and everybody is excited about the new temporary bomb skin and arena reskin. Chosen by the community, the new bomb is inspired and designed to look like a snowman, and we’ve already seen the early concept. But what was the main challenge for the creators? We talked to our Art team and asked some questions about it. Check out our interview:

HMM – What were the first ideas when you guys discovered that a Christmas bomb was on your future tasks?

Paulo Ítalo Medeiros – First we tried to explore a lot of Christmas stuff, even before we decide on the Krampus theme. So, we developed some concept arts for the bomb in pinecone shape, Christmas decoration, Christmas tree, gift box, etc. Even a Turkey bomb was designed, and almost was elected, before we decided to open to the community.

HMM – What was the main challenge in transforming a snowman into a Heavy Metal Machines bomb?

Paulo Ítalo Medeiros – The HMM bomb needs to follow some rules. It must have a different state when it’s loose, when it’s taken and when it’s ready to launch. For the Christmas edition, the bomb needed to be split into pieces – so it could be “open” when was taken just like it happens on the conventional bomb – and required to have retractable spikes to show which is the status that it can cause damage.

Rafael Martinez – I believe the main challenge was in the technical part, in applying all the content made inside the game. As the effects used are additive and the snow is white, it’s important to take special care with the final result so it won’t be too much white.

HMM – On the effects part, what is the main characteristic that players will see?

André “Raqsonu” Cardozo – I hope the cold that comes from a snowball.

Paulo Ítalo Medeiros – Snow! The players will start a match right after a blizzard at the Temple of Sacrifice. We have snow, lights and Christmas decorations through the entire arena.

HMM – What was the main difference in the production process of this bomb in comparison with the Halloween special bomb?

Paulo Ítalo Medeiros – The main difference is the color. For the first time, we have an almost entirely white bomb, which will make it more noticeable in the Arena.

Rafael Martinez – The important point was to decide how literal would be the execution of the concept. On the Halloween event, the idea was to have a bomb in a pumpkin shape, while keeping the bomb with a “foot” in the reality realm. In other words, a bomb made with metal. For this reason, it was important to keep this detail in mind during the modeling and texturing processes, for representing these elements in a better way. However, in the Christmas bomb, we had a playful understanding of the bomb, resulting in a bomb with snow and ice as you can see in the picture below.

HMM – Has the community choice interfered with the original ideas for the arena reskin?

Paulo Ítalo Medeiros – Since we were already working in the arena while the community was voting, we developed three options of a bomb which would match with the arena theme. So there wasn’t any interference in our workflow.