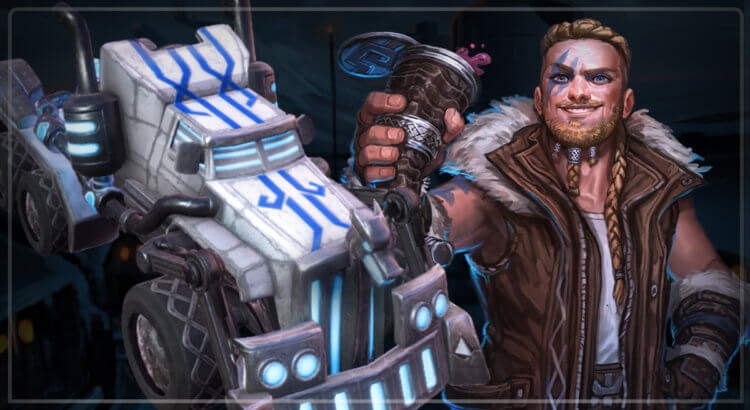 On today’s “Masters of Metal City”. We will talk about Icebringer: the coldest transporter in Heavy Metal Machines. We got the tips from 3 players: Reicamara, No62NoExit and Wenquintoz.

Wenquintoz: In Metal God Arena, when you are about to approach the bomb, use Weapon 3 to make bomb spin and move towards your side. After grabbing the bomb, start turning around towards the wall to block damage with your back. If there is an Icebringer on the opposite side, things will get a bit trickier. You will need to learn to go behind the statue. This will shorten your way to the bomb a little and give you the advantage to grab the bomb first.

Reicamara: Icebringer’s passive weapon freezes the enemies, so try to hit them when you’re near hazardous areas, like lava and acid. The weapon 3 is also a good counter against Clunker. You can use it to pull Clunker instead of the opposite.

Wenquintoz: always go ahead of the enemy using shortcuts. Once you are ahead, turn around and ram into the opponent with the bomb. Use weapon 1, this will slow it down, and after, use weapon 3 with weapon 2. Now you have the control over your enemy and you can pull him where you want. Drag him into the droppers or behind a barrier.

Reicamara: Icebringer is the classic tank. Resists to a lot of damage, but he is not indestructible. Weapon 3 is a good ally because it repairs the vehicle, so use it wisely. He is a heavy vehicle, so you can’t evade attacks precisely. The right thing to do is trust your teammates to protect you and spend the weapon 3 in the best moments.

Wenquintoz: Stand by the side of the last dropper, once the enemy starts to charge the bomb to shoot use weapon 3 and hold the button to grab the bomb. In addition, you can use weapon 2 to put ice as a barrier. If you got time, you can try to align this ice piece in parallel to your car and block bigger area.

Reicamara: Icebringer is easy to play with, just practice enough to master all the skills. If you get that, you will freeze everyone in all directions and be the “terror” of the arenas.

Wenquintoz: You will need to watch over crowd control characters, those who can influence your movement. And be aware of Rampage: the most dangerous character for Icebringer. He should be under your team’s control at all times. He should be number 1 in the “list to kill” of your allies. Rampage can push you into droppers or behind barriers, he can kill you if he lands all his weapons on you, or even half of them (as he will be not the only one who is damaging you). Try to keep Rampage frozen at all times when he is near. Use Weapon 2 to freeze him, forcing him to slide and miss his weapons. Watch out for timings of his weapons. Keep in mind that usually, Rampage players use all their weapons at once, one after another, that is the perfect time to freeze him and make him miss.