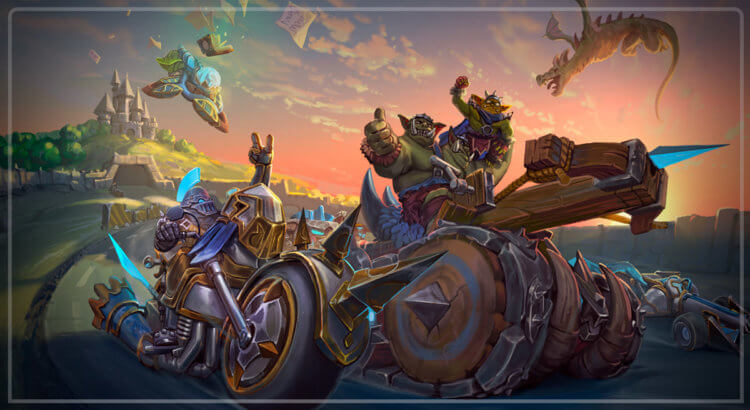 “Bullseye!” Peacemaker shouted with glee as the two-headed ogre’s bolt struck the dark reflection of the dragon.

As the demons had descended upon the battle, the monsters and the knights had found themselves in the unusual position of fighting side by side. The Morning Paladin rode near the ogre’s weapon platform, the knight’s speed and skill keeping the Metallophobic forces at bay. Even the Avenging Knight fought beside the Killer J., all grievances between the two put aside as they held against the Herald’s forces.

“Wanna cry?” The Gadgeteer taunted, as he threw his firework bombs at the hordes of demons. The bombs exploded with a loud bang as it disrupted the shadows, long enough for the Avenging Knight to banish them with his blade.

“Dirt Devil!” The Wreathcrafter cried out, bringing her leaf-covered enchanted vessel down from the walls to where the shaman was fighting. Dirt Devil had put aside his magical reagents for his spear instead as the Wyrm-skull clad mercenary had ridden into the thick of combat with the demons.

“Sorceress. So we meet again,” Dirt Devil’s eyes bore into her from beneath the skull helm. “And to think, this was to be the day I brought you down. Bleh!”

“Now is not the time! I need your aid, shaman. Lend me the aid of your spirits to drive off these demons!”

Dirt Devil looked across the battlefield. The stream of demons was never-ending as the storm continued. With every crack of lightning, more Metallophobic servants of the Herald emerged. The living armies were becoming overwhelmed as they rode back towards the walls of Rockalot.

The Wreathcrafter extended her hand. In Elvish, she spoke a word of power. A golden book appeared, overflowing with light, floating over her palm. “The Tome of Life, with this I can break the spell and end the Metallophobia. But I cannot do it alone.”

It took only a moment’s hesitation for Dirt Devil to nod his head, reaching out with his hand to shake the elf’s. “You will have it.”

“And mine as well!” The Morning Paladin said, his machine riding up, pieces of mummy-cloth clinging to its side. Their golden armor had lost some of its gleam from its battle with the mummy, yet the knight still radiated with a noble energy. “Those who seek to interrupt shall learn the speed of my blade.”

“Thank you both,” The Wreathcrafter said. She held up the book, her magic keeping it afloat as she hovered in the center of her vessel. Her voice carried across the battlefield as she began her ritual, eyes closed.

Dirt Devil grit his teeth as he began chanting in his own tongue, the spirits rising from the earth around them as the demons turned their focus to the sorceress. The trio stood beneath the eye of the storm, where the Herald’s laughter could still be heard.

“I did not expect to be fighting here beside the Paladin,” Dirt Devil said, drawing his spear back to guard against the oncoming assault.

“Nor did I expect to test my steel against the nightmares of the Dark Lord, but fate has its own path, shaman.”

“So it would seem,” Dirt Devil said, a smile sneaking its way onto his face. The knight and the mercenary braced themselves, moving in sync with one another.

Yet even as their vehicles felled demon after demon, the tide seemed never-ending. An arrow struck Dirt Devil and he tumbled out of his machine. Forced to one knee, the horde surrounded him. The Paladin was cut off. This was to be the end. A pumpkin-headed spectre rode towards Dirt Devil, his blade raised.

“Aim for the pumpkin!”

Before Dirt Devil could blink, a giant crossbow bolt tore through the shadow’s head. The spectre’s head tumbled to the ground, its body disappearing to mist.

“Nicely done!” The tiny ogre said, staring through his spyglass at the scene. “It wasn’t the Paladin, but we still got to take the head off a knight, eh?”

“Hahahaha!” The Killer J. The Gadgeteer, laugh was like music to Dirt Devil’s ears as the clown pointed and chuckled. “You fool, you bloody fool! What a mess you made, how will he ever wash all that off?”

A silver metal glove reached down and pulled Dirt Devil to his feet. The Avenging Knight stood in front of him and the Wreathcrafter, putting up a defense that they had sorely lacked.

“It’s finished!” The Wreathcrafter said, throwing her arms wide as the book shone with immense power, its bright light washing over the battlefield. The storm clouds were cast aside as the sun shone down once more, the dark reflections of their own heroes burning into mist as its rays struck them.

The Herald’s spell had been broken.

The ogre chieftain stood atop his arbalester, hands behind his back as he stared down at a victorious battle. “The war is over. We both know now who was truly behind this! Monsters and Knights need not fight one another. Instead, let us celebrate! Together!”

The two- headed ogre nodded his head, kicking a barrel off the back of the weapons platform. The other ogres followed suit, rolling barrels towards the center of the battlefield. Peacemaker strode towards where the knights and the magicians were standing, a serious look on his face.

Peacemaker reached for his sword. So did the Avenging Knight, but the Paladin stopped him, holding his hand back. The ogre grinned, nodding, and then stabbed the barrel.

Ale began to pour forth from the barrel. Peacemaker grabbed a mug and shoved it in the path of the stream. The knights visibly relaxed, as the small ogre held up his glass.

“To friendship between Monsters and Knights! Cheers!”

“They think this is the end?” Metal Herald walked through his tower. Not long after the celebration, the knights and monsters had joined their forces to besiege his tower. Already, he could hear the rams against his walls, seeking to break them down. He had come so close.

“I will reclaim my crown. This world shall kneel before me. I will return with an army. They thought the nightmares to be my limit?”

Herald stepped in the summoning chamber. A book floated above the pedestal, glowing with the power of the Dark Gods. They would not forsake him. Not now, when he needed them most.

“Let them take this tower,” He said, grabbing the tome, letting it draw from his power. “The power of Metallophobia is not depleted…And there are always more worlds out there, waiting to be discovered…”

As he held the book out in front of him, a portal opened, dark and twisting purple energies weakening the border between the planes. The Herald did not even spare a glance behind as he stepped through the portal.

This was not his farewell.

One day, he would return.

When the knights and monsters reached the chamber, all that remained was the twisting purple portal.