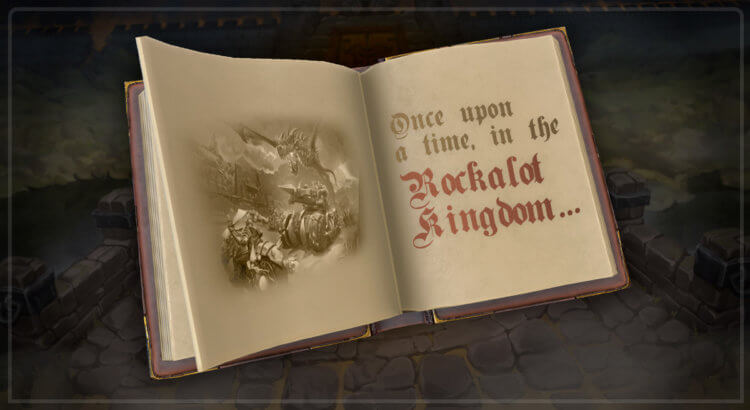 It was good to have large friends.

The diminutive ogre chieftain reflected on that though as his two-headed minion pushed the arbalester towards the walls of Rockalot. The battle against the Knights of Rockalot had dragged on for many years, but this time, Peacemaker had a surprise for the knights.

“Hehehe, we’ll have a surprise for them today. Those humorless metal cans will rue the day they gave me the boot.”

The Mischievous Gadgeteer rode by Peacemaker’s side, his machine’s grinning face a terror for its enemies as it rolled along on its wooden wheels. The tiny ogre had to admit the exiled gadgeteer had made a good ally. With his knowledge and ingenuity, they had transformed the Ogre clans into an army that shook the very ground of Rockalot.

“There are many surprises. No longer shall ogres fear Rockalot steel! The age of knights is at an end. The age of monsters has begun.”

Behind the two marched a legion of ogres, some with one head and others two. Ribbons of fireworks, falling like rain from the sky courtesy of Killer J., The Gadgeteer, announced their presence. Other monsters lumbered alongside the army, most corralled into this by the ogres. The walls of Rockalot awaited them.

As the army drew closer, two machines rolled out from behind the gate. One machine was held in white and gold, with its knight wearing a helmet to shield against attacks. The other machine had its frame covered with a more muted white and brown barding, carrying its knight openly on its seat. The Morning Paladin and the Avenging Knight they were, heroes among Rockalot. Peacemaker snarled as he caught sight of the two through his spyglass.

“Well, well, Goldie and the Joyless Avenger have come to play. I’m not surprised. But they are only two against us. It will be the greatest punchline in history when they fall.”

“Do not underestimate them, Gadgeteer. They have slain many of my tribe single-handedly. They are worth a warband by themselves.”

“Aye, but are they worth an army? Perhaps I will finally get to see what they look like beneath those helms.”

It was the Paladin who spoke, his voice magically carrying from within. “Wicked monsters, turn back to your dark forests and deep caves. You shall not pass through these walls, nor end the rightful reign of the King of Rockalot!”

Peacemaker stood atop the crossbow, his arms folded as he stares down at the knights. “And who shall stop us, shiny knight? Your forces are away. You thought an ogre could not outsmart you, yet here we stand!”

“You may stand above your kind,” the Avenging Knight replied, his voice a graveling echo from beneath his helmet. “Yet we are not as defenseless as you think.”

The ogre chieftain snarled. “Kill the knights!” He ordered. The two-headed ogre let loose the string as the bolt soared right for the pair.

“DEFENSE!” A circle of energy surrounded the Knight and the Paladin, pushing away and damaging Peacemaker’s machine, The Ogrenaut Arbalister. How could that be?

Peacemaker’s feeling of victory was also pushed away. “Magic? They have a wizard with them!”

“Not just any sorcerer,” a man said from behind the ogre and the Gadgeteer.

“Dirt Devil!” Peacemaker said, looking towards the shaman. The man was adorned with the bones and fangs of the mighty Wyrms that his tribe hunted. A man who walked with spirits, Peacemaker had sought him out for his knowledge and power to aid in the war against Rockalot.

“She is the Wreathcrafter, the immortal sorceress of the Elves. Her power protects the walls and those hidden inside. Her wards keep my spirits at bay.”

The Gadgeteer shook his head sadly, letting out a melodramatic sigh. “Then it was folly. Our arrows will just bounce off the walls.”

“It is far from over,” Peacemaker said with an evil grin. “Dirt Devil warned of this possibility. The two of us went on our own quest. We came across a dragon’s lair, filled with treasure and weapons.”

“A dragon’s treasure? Then you found a weapon to break through the Sorceress’s spells?”

“Something better,” Dirt Devil said. He pulled out a bag filled with magical dust and began to chant, drawing the power from the spirits.

“The Dragon came for us. He wanted his treasure back and we drew him out from his lair,” Peacemaker’s smile grew.

“And yet you are here now. You must have something to show for your trouble!”

Peacemaker got inside the tank and turned a crank that revealed the huge stolen magical horns from behind his war machine. So he pulled a lever to make the mighty bellows blow a strong stream of air into the horns’ mouthpieces, as the ground began to shake at their chorus. The bridge started to crack before them. Yet it was not only from the sound of the horns.

A large shadow covered the army as it passed over them. Killer J.’s mouth dropped open as he stared at the dragon soaring towards the walls.

“We have a dragon to show for it.”

It was good to have large friends.