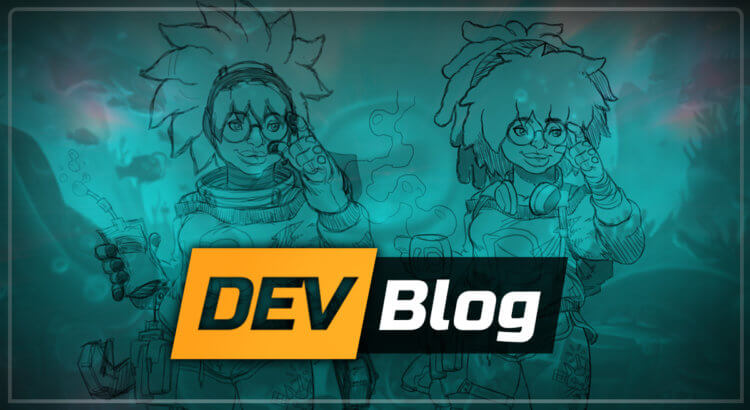 Have you missed me? I am back. Today I will share with you the story behind the creation of one of the most challenging characters we ever made: Stargazer. You wanted to know about her, I wanted to tell you, so now sit tight and enjoy the flight!

This time, the process began with the mechanics of the pilot and the will to challenge ourselves. João “Ousado” Ramos, game designer, told me that the attachment skill was there from the beginning — and the support class too. The developers also wanted a very mobile and evasive vehicle. With some ideas in mind, they started testing concepts.

Paulo “Havano” Ítalo, Art Director, told me that the “space” theme wasn’t there in the first tests. They tried vehicles that would excavate and repair allies from the underground. There was also a “flying saucer” — which is “space” but not the real one. One of the tests was made with a dragonfly. It would be flying around sending drones to combat. It kinda matches that Stargazer thing of applying skills on the ground through satellite coordinates. Is it new for you? So yes, Stargazer’s weapons are released from a satellite.

This satellite thing plus the attachment skill (the special weapon) were huge challenges for the developers, but once they saw everything working, they decided that the character would come from Space. Now, this is when the art starts working on the visuals. An astronaut is a person who lives where they work — sometimes I want to live at work just to enjoy the air conditioning. That’s why Stargazer lives in her vehicle.

Now, what will this “15th pilot” look like? Havano says this was a great opportunity to make something very meaningful to the community. So, inspired by Mae Carol Jemison, the first African-American astronaut to reach space, Jada Jemison, or JJ, rises. She defies not only gravity but also society standards.

The team of devs agrees that Stargazer was the most challenging character and the one that required the most maturity from the team. Innovation and the teleport mechanics were delivered at its best to the community. The players absolutely loved the character and the new possibilities. WE ARE ALL very happy to see you all learning the pilot’s “minigames” and tricks — like the special weapon, which is always ready for use. And I need to mention: the community also wanted a support pilot!

This girl rocks! Everything worked out because we have an amazing and dedicated team, just like our community is always ready to help! Maybe you haven’t played with Stargazer yet, but don’t miss the chance to learn more about the astronaut. Check out this video, see the show she can put on and add her to your pilots’ list!