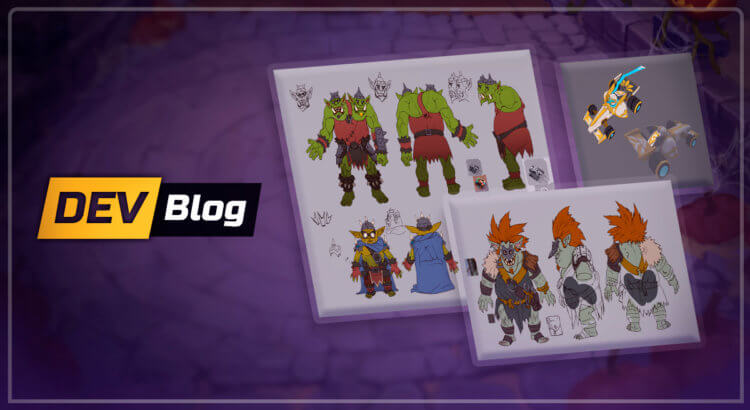 Hi guys, I’m Paulo Ítalo, Art Director of Heavy Metal Machines, and I will talk about the creation of the Halloween items for the 2019 Metallophobia event.

To start the creative work, we inspired ourselves in monsters of horror movies, who are really present in the Halloween period, and the community suggestions. We had an exploration period when some new ideas emerged, and we revisited some concepts of the 2017 event.

We chose the concepts that would ensure a better reading and good animation opportunities to the respective machine guns (Dirt Devil and Photon). But some ideas we didn’t use are stored for a better opportunity to be further developed and show up in an upcoming Metallophobia event.

After evaluating some community suggestions, we judged that “Dirt Demon” was one of the best model ideas for strongly aligning with the concept and mechanics of the original character:

The Dirt Demon has one of the most fun Special Weapons of the game. In it, we took advantage of telling a story of something that attracts something monstrous. In that case, we already knew we would use the giant demon hand, and only after that, we had the idea to include the little demon doing the summoning ritual e being dragged into the depths against his will.

For Photon’s model, we used the Vampire concept, to represent her life steal ability. We also remembered to give her wings, for when she uses her ultimate, when Photon floats for a certain time:

And for the effects and emotes, we based ourselves on the bomb and the Metallophobia models:

For the creation and implementation of all these concepts into the game, these were the artists from the Art team who were involved:

In the development, we also had the participation of other team members:

We started thinking about the Halloween 2019 event on June 9th. The more significant part of the artistic production of this event happened in two or three weeks after that date.

This event was planned to happen in the middle of a season. We had the character creation team on a hiatus, and they embraced the challenge to produce this content in a few weeks. Initially, it would be an isolated event, without any relation to season 6. But, in a meeting with the Art department representatives and Hoplon’s marketing department (including Mateus “Pr3t0” Cavenaghi, Audiovisual Producer and Amanda “Fullscreen” Petrone, Communication Lead) , we had this idea for the Metallophobia models to invade the Rockalot Kingdom (read the parts already published about the lore here: http://bit.ly/2pIu8GW) . So we developed these three acts structure with an entrance and an exit from the Halloween event, affecting the relations between the season characters. For the plot, we used not just the characters, but also the effects. We have the Metal Herald ring that he uses to summon the Metallophobia forces and the book that Artificer and Dirt Devil use to banish Metallophobia as a respawn effect, for example. This made the season lore filled with plot twists and still left a hook for the next Metallophobia.

We hope that players are enjoying what we prepared with so much enthusiasm. I am excited to return to the Rockalot kingdom in the future!