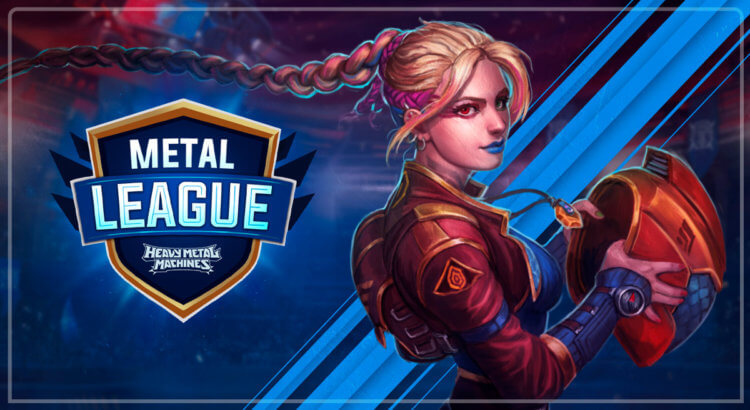 The next Metal League started on October 26th with changes in the duration of each Qualifier.

Metal League’s an in game event that creates a tournament based on the team’s score ranking, this time with the prize pool of 5 thousand Euros. Hurry and team-up, the first round of the qualifiers will be on October 26th at 4 pm GMT 0.

👉 All levels can join anytime during the qualifiers, from anywhere.

👉 Every Saturday – A REAL change to go to the finals!

The Metal League follows the Metal Pass’ season and also a rotation rule. In this season, the matches will occur on the European server. This system works side by side with the Teams feature that’s already in the game. Only registered teams will be able to take part, just in case, if you don’t have a squad yet, invite your friends to play or get in Our Discord (discord.gg/heavymetalmachines) and create yours, our Community Managers are totally open to helping you.

The tournament will be disputed in two phases: Qualifiers and playoffs. There’s an exclusive queue that will be available only on Saturdays to join Metal League, From 4 PM to 8 PM GMT 0. In other words, free up space on your schedule to play on Saturdays, okay?

We have news for this one! There will only be 6 classificatory steps, and the duration was reduced from 6 to 4 hours of battles! This phase happens on Saturdays, from 4 PM to 8 PM

starting, and the first Saturday is: on October 26th. The 8 teams that achieve the highest score will automatically be in the Playoffs’ phase of the tournament.

Wanna know how the points are earned on each stage? Check this Post

This is the final phase of the Metal League, where the 8 best teams from the qualifiers will fight for the prize money, 5 thousand Euros. This phase happens on December 7th, and the semi-finals, the grand final and the fight for the third place will have a special broadcast in the Heavy metal Machines Channels (Youtube, VK and Twitch).

Guess what? ESL Play will be with us again in this Finals!

If you’ve seen the Playoffs from the first and second seasons of the Metal league, the format will be similar to them. Here, the winners will be decided in best of three matches, with single eliminations.

The total prize is 5 thousand Euros, shared between the 4 best teams from the brackets, like this:

So, if you don’t have a team yet, get together with your friends, invite everyone, and create groups to play. Get to our Discord Channel. There’s always people looking for teams there, I guarantee that with this new feature there’ll be a lot of players looking for teams to play some matches to train and to play together!

And as any tournament, there are rules to follow. Pay attention to ensure your path to Victory.