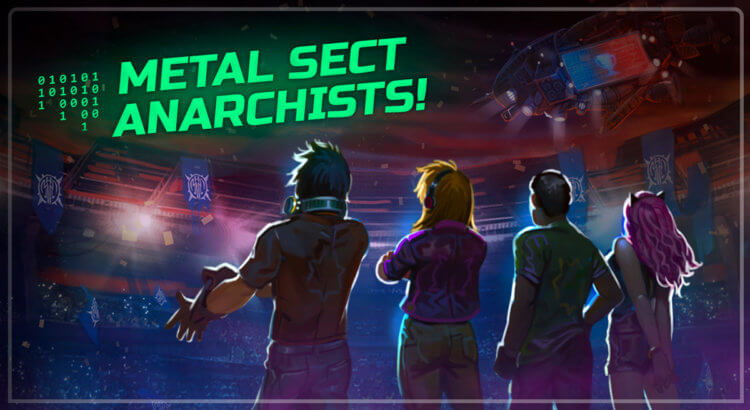 After coming out victorious on the Metal League 5, we spoke with Metal Sect Anarchists (MSA) esport athlete, Antiseptic, to hear about their experience as the champion team on the tournament. Learn with him how to be a great HMM player!

1) What is the history behind Metal Sect Anarchists? How did you discover HMM and decided to build this team?

Our team (MSAnarchists) was formed recently, about 2-3 months ago. But, almost every one of us has been playing HMM for a long time. CERXIK, Emerald, Wenquintoz, and I are veterans of this game. Our lineup appeared when CERXIK and Wollund were looking for a clan and stumbled upon MSAssembly, which created a new lineup called: “MSAnarchists”. This lineup included: Wollund, CERXIK, Emerald and Wenquintoz (and later they invited me).

2) How and when did you meet Heavy Metal Machines? What do you love the most about the game?

It all started at the beginning of 2017. Filipidze (our friend from the clan OLD_, which is currently VCK) saw this game on Steam when he was looking for free games, later he watched the video on YouTube and got interested, invited me, and later I invited CERXIK. We even wanted to go to the 2017 championship, but unfortunately, it didn’t work out (our fourth player left us without warning). About Emerald (AKA KVAS, AKA Izymryd), we met back in 2017 when playing casual matches (we even played against the entire KVAS roster). Wenquintoz had played in NEON KNIGHTS before and is (as I said before) a veteran of the game. Wollund, joined HMM recently, about half a year ago, I told him about the game, and he was interested in it. But, he is equal in strength to us, as he is trying very hard. We all really like the developers, they are doing their best, bringing interesting things to the game, including: maps, cars, balance, modes, etc. If Hoplon doesn’t succeed or they make some mistakes, they try to fix it and ask the community for help (I personally haven’t seen such close communication with players in other games). The gameplay is very good, it’s a mix of a MOBA-shooter-racing, and it is just something incredible. At first, everything seemed too fast, but as soon as we got used to it, we all immediately got involved in this whole “rock party”. Accessibility plays a big role, as HMM provides great opportunities to enter eSports and receive prizes (especially when compared with other MOBA projects). For all these advantages, we love and respect HMM. (P.S. And of course, I love HMM because of Icebringer. 🙂

3) During the finals, one of your strongest compositions (with Icebringer) was beaten by a heavy-damage one from Rumerus Bala. What were your thoughts to turn that situation around and get control of the game again?

I mostly play as Icebringer, and as the main creator of tactics with him, I was very surprised, but that was expected from RMS. We know those Brazilian teams: ROLL, RMS, HATI BLUE. They love to play with the “damage” tactic (or 3 interceptors and Photon). I expected that the “damage” would be very high, but in order to kill me on Icebringer, you have to try hard (and they did it). They are really strong guys, I respect their game and tactics. We realized that playing with Icebringer would not work any further, since we lost in the second match. And we decided to play our “new” tactics “Lotus without support”, which is a very crazy idea, but you can use it. In the last match, we simply killed those who interfered with our Transporter and exhausted the enemy. Wollund did an excellent job on the Black Lotus (we all did, actually). This plan was, so to speak, our “calling card” and Wollund was a “dark horse” and it worked (with difficulties). And one more thing, Icebringer is not an immortal god, there are 1000 ways to kill him, the main thing is to know how. (Of course, I won’t tell you this 😀 )

4) How did it feel when you made the final score and knew the title of the championship and the prize were yours?

This feeling… When you strive for something, for a long time and finally get it. Great feeling. It is difficult for me to describe in words my joy and shock from what is happening. Each of us strove for this victory, and we were able to do it. We all achieved victory and for each of us, this day will remain in our memory for many years (or for life!).

5) What will you do with the prize?

Each of us will spend a prize in our needs. For example: Emerald bought a sofa with the prize from the European tournament :D. I think most of us will leave the money and will not spend it until a certain time. Personally, I want to buy a new monitor for my computer. I also know that Wollund will build a new computer for himself.

6) Will we see Metal Sect Anarchists in the next Metal League season? If so, what are your expectations for the tournament?

If nothing serious happens in our lives, then, of course, you will see :D. We are already thinking about the upcoming European tournament. Perhaps we will have changes in the roster (but this is not certain). I think the European teams will be well prepared for the next tournament. But, if they don’t do it, perhaps we will become champions again (now in Europe). But, I am more inclined to believe that everyone will be serious about winning. So that means there will be no easy victories. 😀

7) What is your tip for players who are joining the game now and want to assemble a competitive team, and then one day earn money playing HMM as well?

1 = Learn, 2 = Experiment with machines, 3 = Train, 4 = Find friends, 5 = Build a team, 6 = Experiment with tactics. You must clearly understand what you are capable of and on which machines, and if you have weaknesses, then try to fix them, or just don’t think about them and try to direct your forces into another machine (example: you play poorly as interceptors, try playing as a transporter or a support.) And remember, everyone has weaknesses, even invincible champions (it just seems like we are invincible). Never give up and go till the very end. After all, we also did not give up and now we are champions. Thank you all for the interview, and if you read it to the end, then you are a good fellow! Good luck at the HMM Arenas!