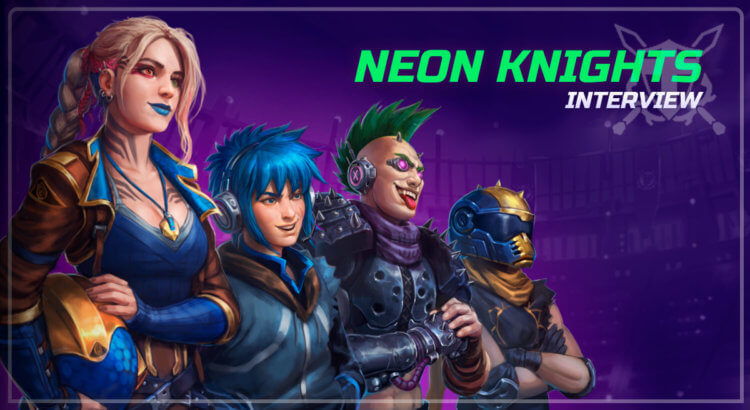 The first Metal League ended recently. As we know, you want to get to know better a learn tips to be next champion in Heavy Metal Machines.

NeonKnights got the 1st place in the first edition of the Metal League. With an excellent performance in the qualifiers, they could get one of the 8 spots to take part in the playoffs. 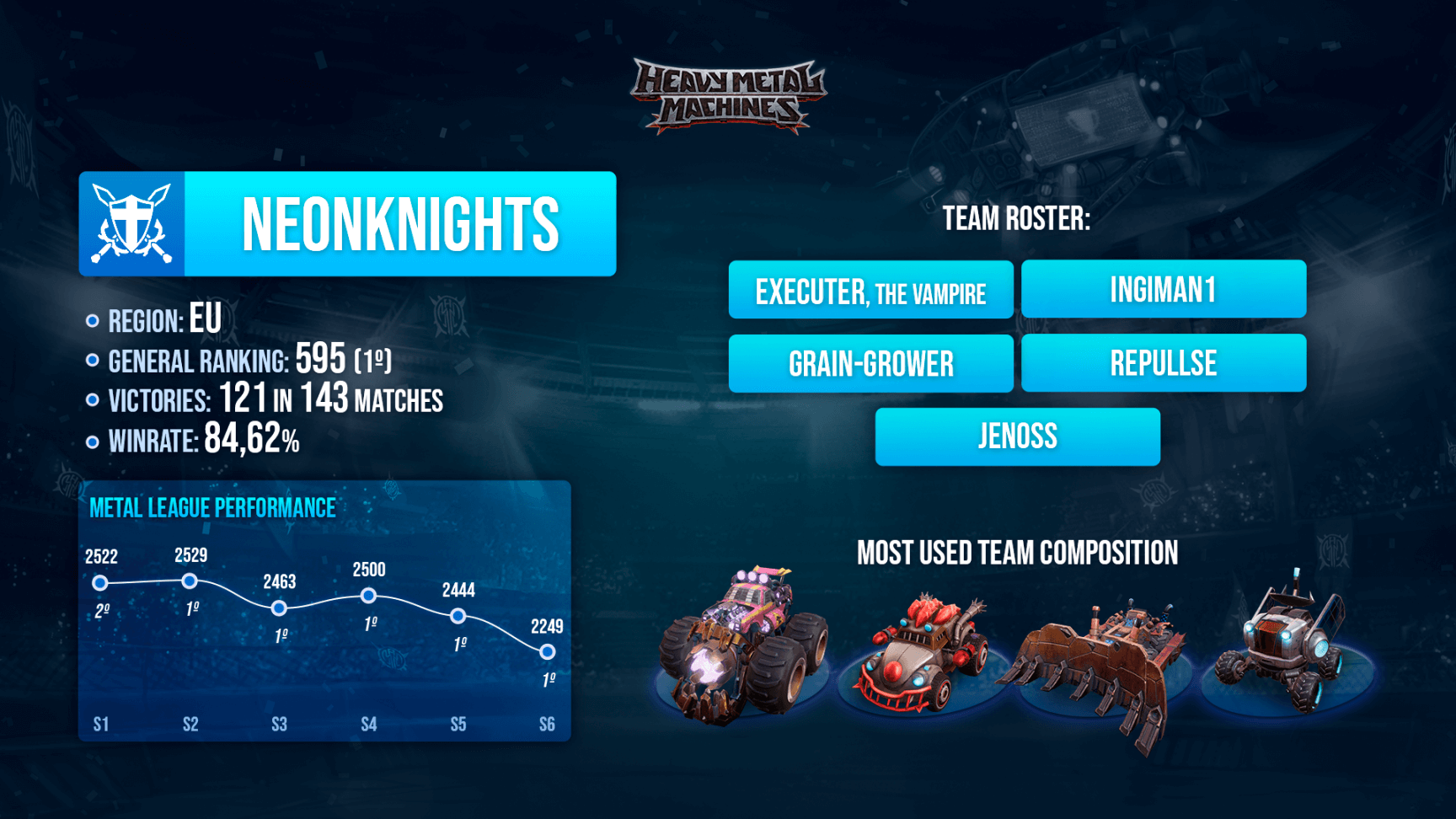 Their performance was kept in the playoffs. Accomplishing strategies, they could run through the brackets and assure the major part of the prize pool as the first champions in the tournaments system in Heavy Metal Machines. 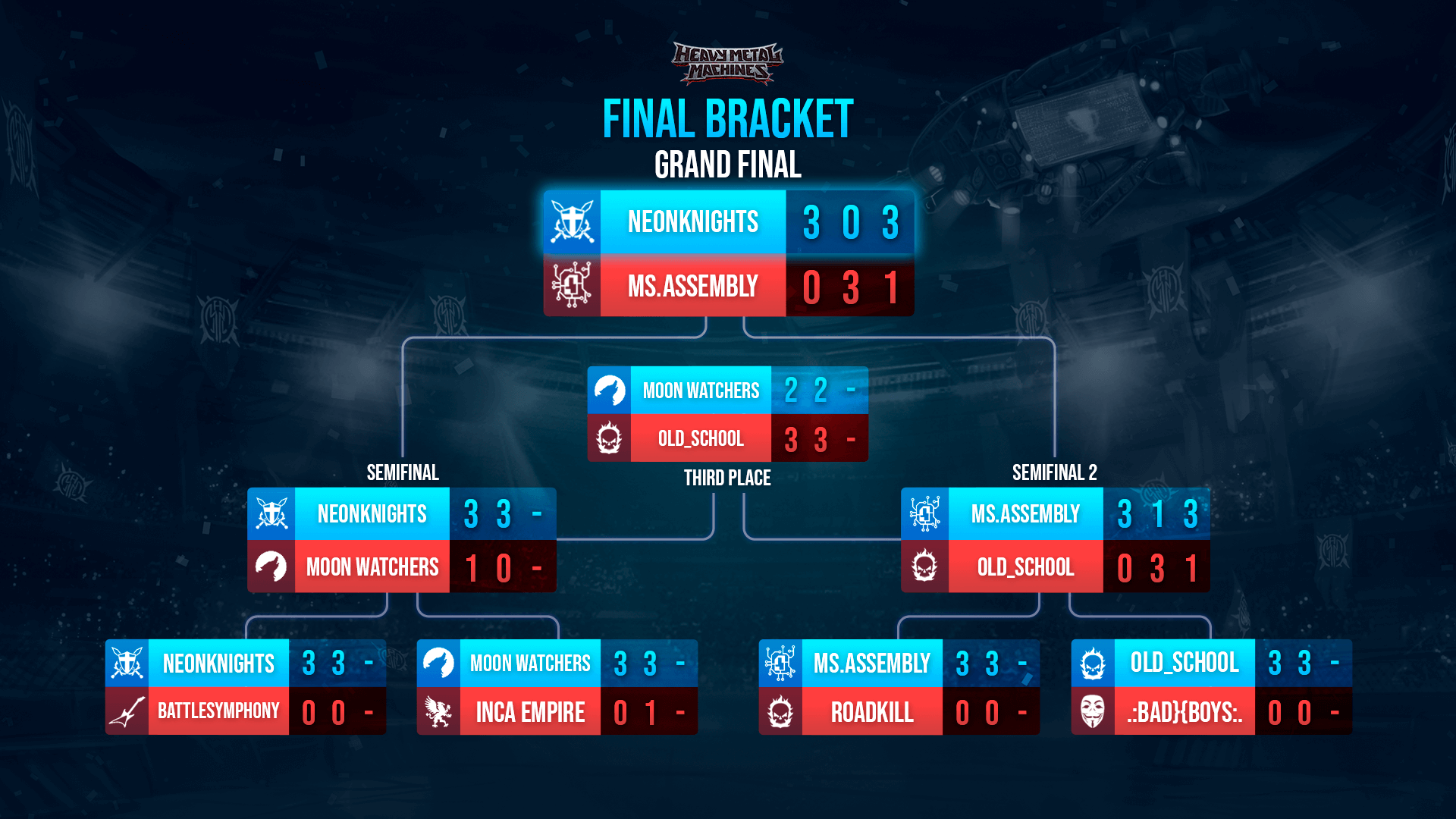 We reached out to the Captain of the champion team, RePullse, to learn more about the story behind their success.

1) How is the story behind the Neon Knights? When did you guys decide to team up and compete in Heavy Metal Machines?

“[…] We teamed up for the first SA tournament, which was the second global HMM tournament with a money prize. By that time all of us already had around 100-400 hours of playtime […]. I liked the team thing, I have never tried something like that before, and since our captain decided to forget about the game it meant the team would not progress anymore. So I suggest to create a new team and invite everyone in it, but I will be a captain, I will register a team for the tournaments […].

[…] Jenoss and Executor accepted the invite, and Mr. Universe (forgot to mention) left us even earlier, even before the tournament. We created a team and changed its name 3 times. The first one I will not tell because it was really silly and mine. The second one was suggested by Jenoss – “MetalAnarhists”, and tag would be the first and last letters [MS]. The third and final one was suggested by Executor “NeonKnights” with tag [NK]. But since I created the team, I had to change name and tag every time when I was disbanding team and creating it again, inviting my teammates (otherwise you cannot change name), and when I was writing a new name for the team it was a lucky coincidence that our name had a 4-letter word, NEON. Following the example of KVAS, I have used this tag, and nobody complained. Later we took Mr.Fox into our team and played with him in community tournaments. […] Then after a couple of months, we changed Mr.Fox to Wenquintoz. […] In about 2 weeks before the 1st stage, we went on different paths, and we needed more players, as we were left only 3. We have decided to invite ingiman, but as a backup, because he does not have a mic. At the same time I remembered about Smurf, we played against him in one of the community tournaments, and I thought he will be a worthy candidate. And that’s about it. With this roster, we played in all stages and then in playoffs.”

2) For how long have you been playing Heavy Metal Machines? What is the thing you most like regarding the game?

“I was playing HMM since August 2017. I found out about the game from YouTube. […] I love to play with good players, with them or AGAINST them. I can feel that in such matches you can see everything that the devs wanted to show us with the game, all this drive. […] I also like unique items. It is probably one of the most important things that make me join the game almost every day.”

3) Your team won 5 of 6 Stages during the Qualifiers and lost only the second game of the finals during the Playoffs. What is the secret behind this success?

“[…] First of all, training. Often games together, playing against serious opponents; otherwise, there would be no point in that. All that makes us united, and in some situations, we understand each other without words (but that’s really rare). When we were playing in the tournament and during stages, we as any self-respecting team, use Discord… or any other type of voice communication, and shot commands allow us to react faster […]. You can respond quickly and do what your team wants you to do. But I think that out of all the things I mentioned, the most important one is team play. The more there are moments where you can understand each other without words, the better you will be. It is even better than a short one-word command.”

4) How was the feeling of winning this tournament being broadcasted for the entire world and knowing you guys will get 2k Euros as a prize?

“To be honest, we played because of a banner more. Money is also good, but I think if we would get the 2nd place, we would rather regret losing flag than not gaining 500 euros for each. […] However, we are super happy to get the banner.”

5) Will we have Neon Knights playing the Next Metal League? If yes, how you guys will prepare themselves to play in the South American Server?

“We will participate in SA tournament, for sure. And we do not even count on getting the 1st place […]. However, that is our goal, get the 2nd place. But by any means, this does not mean that if we get to finals, we will not fight for the 1st place. We will try our best, for sure. […]”

6) What is the best advice you can give to new players that are looking for a team now and getting ready for the next season?

“No matter how bad is your and your teammates level of play, if you play regularly, your skill will increase and become equal to the top teams, you will not even notice!”

That’s it! The next Metal League season is coming soon. Assemble your team in our Discord Channel, bring friends to play, and start training now to feel the same as NeonKnights team felt! Play now to be the next champion!

See you in the arenas!