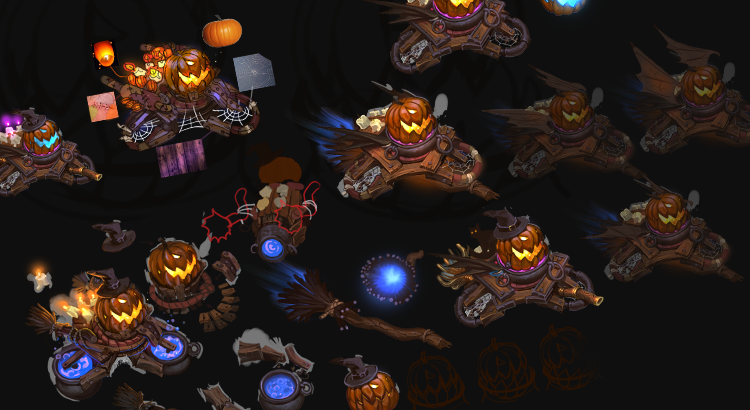 Metallophobia has started this week, the special event to celebrate the Halloween on Heavy Metal Machines. With this date, four awesome skins have been added for a limited-time offer – and two you can get for free. You also have to take note that these skins are part of a new special tier – Heavy Halloween – which changes both your machine appearance, as well as the visual effects of your abilities.

But do you know the concept behind each one of them? Check out some inside details about the making of the Halloween skins:

Known as the “old hag” of Metal City, nothing suits Artificer more than the Witch role. In a world ruled by the Metal God’s power, her science is considered “witchcraft” and the name “71st Witchcraft” is a clear reference to one of the most famous Witches of the Latin culture: the Witch of 71 (from the Mexican TV show “El Chavo Del Ocho”)

The main idea is to transform the Artificer machine into a witch. In the beginning, the artists considered to include a black cat and a witch’s cauldron, but in the final version the machine has the candles, the pumpkin, and the traditional flying broom. Check out the early concepts: 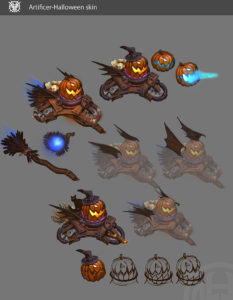 “I like the bat wings. It’s the element that gives her movement” – Raqsonu

“Creating Artificer’s Halloween skin was pretty cool because the construction process was different. It’s not made by other cars’ scrap and neither strange technologies” – Daniel Kai

The “71st Witchcraft” skin can be bought for 915 Cash in the game’s store or by completing the special mission “Heavy Halloween.”

One of the most famous Halloween creatures is the Frankenstein. The Little Monster’s skin name is based on a phrase said by the doctor that created artificial life in a patched body – “It’s Alive.” Because of that, the Metal City’s streets will never be the same after seeing the exposed brain of the Little Monster’s experimental machine.

Besides the clear inspiration from Frankenstein, the goal of this skin is to represent the attempt to create artificial life. The exposed brain means the fragility of the experiment and the tires are made from mended texture parts of different Little Monster’s skins. Another important spec is the mini “Wardenclyffe towers” from the machine side that uses the magnetism to make the pilot “jump” with the Weapon 2. Check out the early sketch: 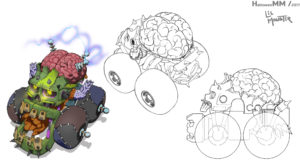 “What I like the most in the “It’s Alive!” skin is the fact that it is the realization of an early concept of the original Little Monster machines. It’s the completed “monster” car” – Paulo Italo

There are few animals that can cause more fear to people than spiders. The “Arachnophobia” (1990) movie tells a story about a city taken by spiders and, in a way, Rampage’s anger can be just as dangerous. With his usual machines revamped in an arachnid shape, the pilot’s enemies certainly feel the same fear when facing him in the arena.

Rampage’s machine got a giant-spider traces with this skin. Besides, the frontal piece has web details, and his skills have been customized, visually. When activating the special weapon, Rampage leaves a trail in a web shape, and you can see little spiders running out of the cracks. Check out the early concept art: 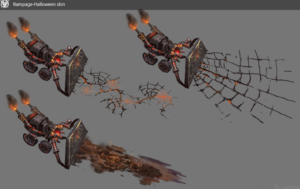 The “Arachnophobia” skin is available in the game’s store for 915 Cash.

The Black Lotus’ skin “Curse of Nefertem” is inspired by the classic mummies movies. Nefertem was an ancient Egyptian divinity represented by the lotus flower, while the “Curse of the Mummy” was one of the most believed creeds when the archeologists discovered the pyramids. It’s worth to remember that Black Lotus’ special weapon is called “Curse of Yama”, so this is the reason of the skin’s name.

Besides covering all the car with mummy bands, other elements are making this reference to the creature. The skills were changed with sand special effects to remember the Egyptian desert, and the special weapon has a different symbol projected below Black Lotus. Check out the concepts: 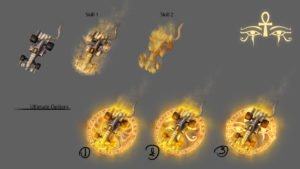 “What I liked the most about it is the sand effects, which matches perfectly with the skills. After all, besides passing through anything quickly, it’s very destructive.” – Charles

“The Black Lotus was almost ready already, as we all said together: “Mummy”, and covered it up with bands and wrinkles” – Raqsonu

The “Curse of Nefertem” skin is available in the game’s store for 915 Cash.