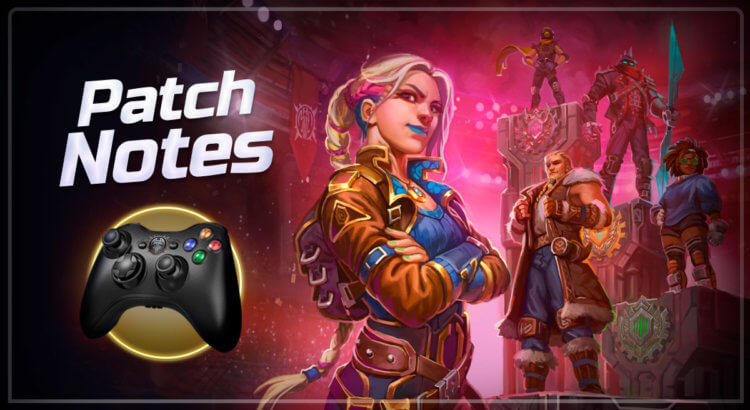 A new patch has been released today, bringing the Ranked Mode and the renewed Gamepad support.

Overview
Competition has reached the next level. The new mode adds a new matchmaking, in which the matches played are accounted for an individual player score. This score is used to rank each player under a Division. The divisions are:

Bronze, Silver and Gold divisions have 5 subdivisions, from V (five) to I (one). For example, after the 10 placement matches, an account may start at Bronze III (bronze three), and then progress to Bronze II, Bronze I, and then is promoted to Silver V, where it shall keep progressing until reaching Gold I.

The Bronze, Silver and Gold Divisions encompasses 1.000 ranking points, and each sub-division encompasses 200 points. The Heavy Metal Division is a special tier for the top 10 players from Gold I division.

At the end of each season, players will receive exclusive rewards according to the highest Division reached within the season. The higher the Division, the better are the rewards.

How does it work?
The Ranked mode is located under the Play button on the main menu. Click on it and then choose “Ranked Mode”.

The ranked matches have some unique properties:

Upon taking part in a ranked match for the first time, the first 10 matches will be “placement matches”. This means each player will play 10 matches until being effectively placed in a division.

During the placement matches, the player will be labeled as “Not ranked”.

Ranked Mode Schedule
The Ranked mode will be available during specific periods, on each region, as follows:

Players can check the schedule for each day by clicking on the Schedule button on the Ranked mode menu.

Ranked Mode Seasons
The Ranked Mode is held on seasons, and each season will last for a few months. Here’s the schedule for season 1:

Rewards
There are two different rules used to deliver the rewards on each season:

The gamepad support has returned, much more polished and improved for the game. Play the way you want!

Supported controllers
Any gamepad will run normally on HMM, however, some specific models have official support, which means that the game interface icons will adjust according to the model used. Currently, the controllers for Xbox 360, Xbox One and PS4 have this feature.

Other models will display the interface icons from Xbox 360.

The navigation on the Shop and Metal Pass are not yet supported.