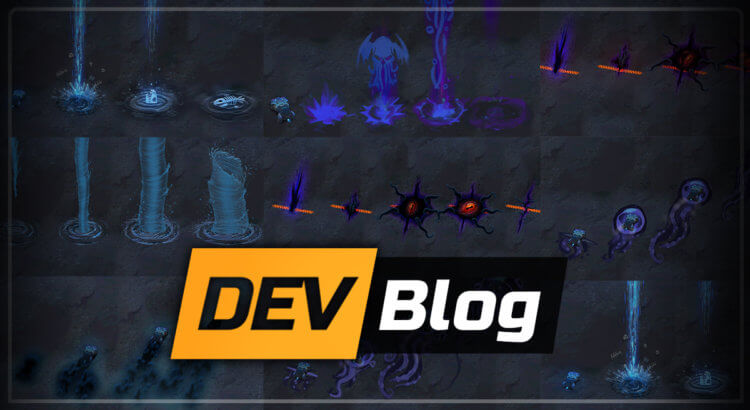 It’s been a week since the Into the Abyss season is out there on the streets and we know that you are loving it! Why? Because you all have been writing very positive Steam reviews! Ah, there are those Discord-engaged pilots who tell us everything over there — and this is very helpful too! Thank you 🙂 But hey, how did we end up creating this abyssal universe? I talked to Paulo “Havano” Ítalo Medeiros, the Art Director, to get all the hot information for you, check it out!

Everything started with this Artificer model. We wanted to create an underwater universe around the “Journey to Rupture” lore — which is based in the Bioshock game (yes, we play other stuff too). As Havano’s team developed the story, they noted it would be a mistake to create an abyssal city. It’s simple: it would raise a wrong expectation to the community, and we don’t want to frustrate our player base. Instead, the art team came up with “Into the Abyss”, focusing only on the H.P Lovecraft mystic narrative about the depths of the seas.

There are 3 Heavy Metal models based on the theme. Each of them had a specific goal: the monster, the explorer and the adventurer. Havano explains that Metal Herald is the perfect character to represent the abyssal and mystic monster. Mystic guy, monster pope, what else can we call him?

Dirt Devil was supposed to be the explorer. Havano says the art team tried to bring a submarine model for the sands’ pirate, but it didn’t fit well. Then, just like most of the best ideas we have in life, the team saw a light: what if Stargazer becomes the explorer? YAAAS! The space explorer now has a Heavy Metal model to explore the depths and the abyssal rupture.

Now, the adventurer. What would Dirt Devil hunt on the seas? Sharks!

Fat Johnny (that little rat always hanging out with DD) became a pufferfish because a pufferfish can also get inflated. Attention: the internal tests are essential,and the epic shark Special Weapon was born in one of those tests. One given day, one of the testers used the Weapon 2 and Special at the same time, but back then, the Weapon 2 was a helicopter holding a steak and the piranas trying to catch. On the other hand, the Special was just a shark coming from below.  The result? The shark jumped and seemed like it wanted to bite the meat. BAZINGA!

At this moment, Havano came with the idea of this fantastic weapon you can see down here:

What about the special items? The artistic team inserted abyssal creatures everywhere, including in the effects. One in special, the “abyssal sentinel”, brings the core of the season theme right at the starting line.

Despite the mystery from Lovecraft, we also left some space for funny stuff. We want you to add some laughter to the gameplay. The kill effect “leftover” transforms your nemesis into a cartoony-fish corpse. Just like a leftover from dinner:

If you happen to be killed, which unfortunately might occur in a match, you can use your “pufferfish” rebuild effect to cheer up your team. The effect is based on the “Abyssal” version of Fat Johnny (like I told you above). Your machine will rest for some seconds in the belly of a spiky-pufferfish, that will dive down into the arena and spit you out to combat again. Do you see? We all want you to play hard and compete, but we also want you to have a good time and FUN in the arenas.

AND WHAT ABOUT STARGAZER? Hold the line, gladiators! We will come back to talk about the development of this pilot and its cutting-edge teleporting mechanics! The next Dev Blog will bring everything about the newest girl in town!

Great stuff, right? Now that you know what happened in the backstages of Season 2, why don’t you visit the store and purchase the Into the Abyss pass and unlock all the precious abyssal items into your inventory? Go to the store and have fun.