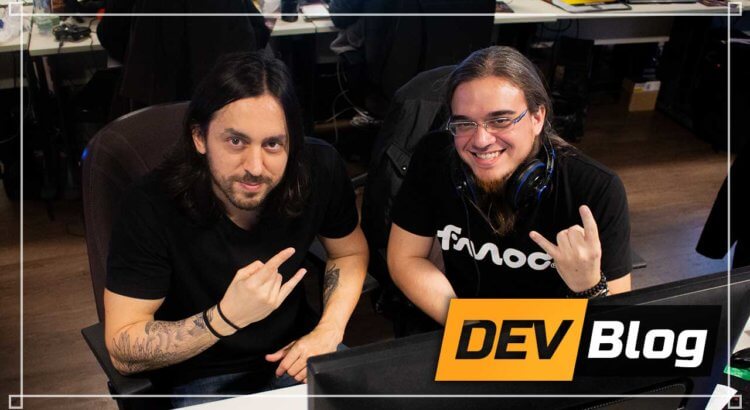 There is a saying in the musicians’ circles: “if you didn’t notice the drummer, it means it was well played”. Game soundtracks have this same tonic. If you didn’t notice it and had a good experience playing that game, it means the audio helped you and provided the proper feedback to the action. In Heavy Metal Machines, we can go beyond and say that the players notice our soundtrack, effects, and love it!

The audio programming starts off with a sound designer. At Hoplon, Luiz Carvalho is that guy. His digital audio workstation is basically audio libraries and Reaper. Usually, the game studio has a lot of art concepts, and now Luiz brings the same “sketches”, but for sounds. This is part of co-creating with game designers. He says that it is important to understand the nuances of each character to come up with effects.

One example is the “character 14”. He received a mix of “glass breaking” and “rocks rolling down a mountain” as effects for his skills. This mixture resulted in ice weapons. Just like video effects have their relevance hierarchy, audio has levels of importance. Luiz says that for a weapon 1, which has faster cooldowns, the sound effects can’t make the player tired or bored. It has to go along with the weapon’s pace. Now, the special weapon has to be glorious and fulfill the players’ experience with that character. So in this case, the audio will match the visuals and make the pilot feel the thrill.

The soundtracks aren’t just “uploaded” to the game. There is Rafael Hrasko, our audio programmer, to transform the pumped-up effects into codes. According to Hrasko, working with Heavy Metal Machines is challenging because it’s online, which makes the job even more gratifying. HMM has a dynamic mix, made possible by the Fmod software, which means real-time adjustments based on what is going on in the screen.

Hrasko highlights one of Hoplon’s most recent achievements, the instructor. In this feature, the challenge was to program the audio in a way it would predict the player’s intention. It wasn’t enough that HMM detected the pilot’s position in the arena, like “close to the goal line”. Here, the programmer inserted a system that can comprehend the possibilities and suggest the upcoming actions for that challenger.

Mind-blowing revelation: Hrasko manages to program the following sequence of tracks, in harmony: instructor, narrator, special weapon, regular weapons, soundtrack, environment. Depending on the on-screen action, their volumes mix dynamically. After internal tests, the game is ready for you on Steam.

Have any topic suggestions for the next episodes of our Dev Blog? Drop us a line!